Google AdWords is one of the best platforms for inbound marketing. Google is the world’s largest search engine in terms of traffic. When someone is searching for products or services you offer, you want to be found.

Having the proper account structure is important for all campaigns, but structure can be even more important when budgets are tight and low CPA (cost per acquisition) is one of the main goals.

At the campaign level, you set your campaign budget and targeting and make the initial decisions on the structure. A number of ad groups you put in the campaign depends on your keyword research, budgets, and how tightly themed you want your campaigns to be.

Account structure can become a major issue when one ad group has significantly more impressions or clicks than other ad groups, which in turn may take up a larger portion of the budget and thus limit impressions and clicks for other ad groups.  It can greatly hinder campaign performance when the ad groups with the higher amount of clicks or impressions (i.e. budget) are actually lower performing from a conversion standpoint, thus limiting overall conversions in the campaign. 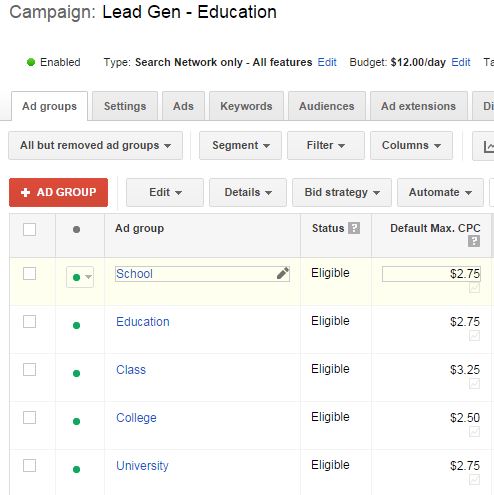 Above is a lead generation campaign targeted towards schools. The keywords inside these ad groups have a low search volume, which is why I can get away with putting five ad groups into one campaign with a small budget.

If one of the ad groups starts eating into the daily budget to a point where the other ad groups become limited, I should then break out that ad group into its own separate campaign.

In the above campaign, my keywords are similar to the theme of the ad group and my ad copy is relevant to my keywords.

Cost is a concern for many businesses advertising in pay-per-click. That’s why focusing on ad group structure is so important.

Inside an ad group should be no more than 15 keywords. We usually don’t go over 10 keywords per ad group. The reason is that I want my ad copy to be as relevant to my keywords as possible to increase quality score. A better quality score means paying less for higher positions.

By keeping your ad groups tightly themed and using your keywords in your ad copy, you’ll get a higher quality score, which amounts to paying a lower cost per click.

A common mistake seen in AdWords accounts is the match types used for keywords. Many people use broad match keywords, which can result in irrelevant clicks and low conversion rates.

Broad match keywords cast a very wide net, and in most cases, they’re not the best strategy. We most commonly use phrase match, exact match, and broad match modified match types because this allows us to further narrow our targeting. Tighter targeting will make the campaigns much easier to optimize down to a more granular level and can effectively increase campaign performance.

As always, if you need help advertising on Google Adwords feel free to contact the only Google Partner in North Dakota. Let’s talk search.